8/21/2011 - It's that time of year again! This Saturday, August 27th 4-7pm Fright Dome @ Circus Circus are holding their annual hiring event for the Halloween season. Yours truly will be there to get in! Waiting also for Oktober if able to get original web address domain back of bexd.com.

In other news... making a trip to Sweden with a pit stop in Helsinki, Finland!!

6/13/10 New Moon Shoes ep up on Bex's YouTube! And help out toward efforts of the fight against cancer so that a cure can be found! Your donations go to cancer research and help find a cure so that cancer stops killing or ailing our loved ones!

Also, keep checking back for updates on the music video "I Want To Kill"! Andrew W.K.'s song that RockForce Productions is producing. It is a Comedy Zombie Music Video! New photos also coming!

6/8/10 Yesterday's filming was a success! Thank you to all those who came out to participate and their time! Here is a little sneak peek of yesterdays filming, compliments of Robert Miler.

5/30/10 Filming has begun for Andrew W.K.'s "I Want To Kill". It is a comedy zombie music video. Should be completed by 6/24/10. Tuesday is the hockey Hanson Brothers scene and this Sunday is the birthday party scene, which will be an afternoon of face painting, little zombies, food and filming. So just like a real party!

Help my friend Morgen Night Aka Morgue the Shock Surgeon:

5/18/10 - "Reesesholics" sketch video now up on YouTube! It's become an episode! Check back in a week for bloopers and my next video short with moon shoes!  ? !!

5/10/2010 - Bex is participating in the Lekumemia & Lymphonic Society's Marathon for cancer in Dublin, Ireland on October, 25th, 2010! All proceeds go to help funding the cure for cancer. Help fund raise for this awesome cause! I will be doing some episodes on my YouTube channel to help raise money for this cause and help me run in this marathon. Click on the link provided on the sidebar, which gives all the details!

4/26/2010 - Check back to my YouTube pg, link below for up to date videos posted. I was recently in a feature film "A Different Corner" as an extra, Means To An End music video, Sin City Sinners music video and working on filming some skits starting next Tuesday!

3/16/2010 - I know its been a while since I've updated with news but now you can finally see the Punk Rock Holocaust scene that I was in! Go to my Bex's YouTube page (http://www.youtube.com/djbex77) (The link maker didn't want to work today) and see all my videos. As soon as other media comes available, surely that will be posted as well!

9/3/08 - Been on the prowel where I was in on Criss Angel's MindFreak and I am definitely in the end of the Cremation episode! I was dressed up in my Hallowe'en costume and was an up close commentator and you cannot miss me!! I added the video. There was another episode I am sure you should be able to find me in and I am keeping watch where that one is.

9/1/08 - I was hanging out at the Hard Rock Hotel and on my way out Penn & Teller passed me by. Saw Penn earlier leaving the box office and thought it a was a guy that looked like him and as I was leaving through the hallway towards the parking garage, There they were talking to a couple and Penn was trying to hurry pass possible fans and looked right at me to look ahead and I said "I knew it was you". But didn't get a chance to tell the guys hi since they were rushing.

6/5/08 - There has been some changes happening with me regarding schedule wise but have done 2 modeling gigs. Let's see what summer brings and VEGAS!! I gotta get out more in Vegas.

10/31/07 - Beky in Burger King Interview: In Las Vegas as I was waiting for the bus, this producer pulled me aside and asked if they could interview me. I said sure just as the bus pulled up. I was met up with the rest of the filming crew and located near the Burger King on W. Charleston. It was an interesting 20 minutes. I was asked what my thoughts were on Burger King comtemplating on taking away the Whopper! yYeah, I know!! I had to do some ad libbing, some light acting. The producer said I was a natural and enjoyed having me as a guest interviewee. I had to sign a release form and as a bonus was given a $10 B.K. card! AWESOME! It was fun!! Being on film usually is!! I love it!! They weren't sure when or where it will be seen, so I guess somewhere out there, look for me in something of a Burger King short - maybe on YouTube!

See what McKay Hatch is doing to help make a difference! Check out the NO CUSSING CLUB! (www.nocussing.com) I am so happy I am not alone in this anymore.

9/28/07 - Beky attends AWESOME TORONTO MAPLE LEAFS GAME (HOME WINS 6 - 4 against Detroit Red Wings) AND lands in MIKE MYERS' MOVIE "THE LOVE GURU"!!! She is an extra at the game in the lower level seating by the plexiglass on the BAY ST. Side of the ice rink! The movie is developed by Mike Myers and stars Jessica Alba, Justin Timberlake and an upcoming actor. 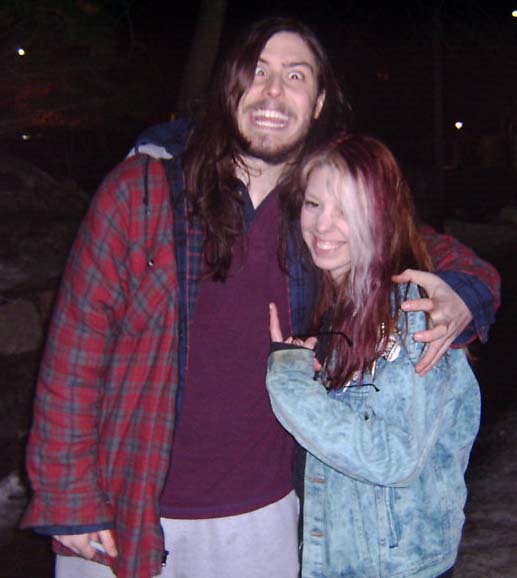 Passion is the Fire that Drives The Soul!- BR